Excellence in the further development of Hydrocodes

For many years, hydrocodes, numerical simulation methods for highly dynamic processes, such as crash, impact and explosions, have been used at the Ernst-Mach-Institut. In addition to the use of software from various providers, the institute’s own hydrocodes are being continuously developed, applied in projects and also licensed for external customers.

A particularly demanding field of application is the simulation of initiation processes in plastic-bonded explosives (PBX) on the mesoscale. In this kind of numerical models, the heterogeneous structure, i.e., plastic-based binder and micrometer- to millimeter-sized explosive crystals, is represented in high spatial resolution. The challenge here is to replicate the behavior of the material under rapid mechanical or thermal loading up to possible initiation in order to be able to predict the time when a chemical reaction starts. Here, internal processes, such as the damage that is caused by detachment of crystals from binder or by breaking of crystals, play an important role. Using this type of models, security features of PBX, for example, the insensitivity to shock loads, are being investigated and optimized by changing the composition. The new methods required for this application are implemented in EMI’s own software SOPHIA, which, in this context, is used for the mesoscale simulation of PBX for the German Federal Armed Forces.

An essential subtask is the generation of representative structural models. For this purpose, computed tomographic images of explosive samples can be generated at the institute. The geometrical structure is extremely complex and has to be simplified for numerical simulations. EMI’s own software tools are used for model generation. The tools generate geometric models with characteristic crystal shapes on the basis of given grain size distributions. The so-called “representative volume elements” (RVEs) are then converted into computational grids, which, together with the required material data and initial and boundary conditions, are the basis for finiteelement calculations. Extensive optimizations are necessary to find the right balance between efficiency and accuracy of the calculation.

Meanwhile, methods are now available in SOPHIA that, in this combination, cannot be found in commercial and research codes of other institutions worldwide. This includes sophisticated algorithms for the calculation of temperatures in dynamically loaded materials, which have been combined with a special element formulation for tetrahedra. Tetrahedral elements offer maximum flexibility for the representation of geometrical structures. However, they tend to show numerical instabilities, particularly with hardly compressible materials, such as binder materials typically are. Therefore, special correction algorithms are developed and used. The figures on page 18 and 19 show an RVE in its initial state and the simulated velocity and temperature distributions. In the simulation, the right edge has been pushed to the left at a speed of 1000 meters per second. At the displayed point of time, the resulting wave has almost reached the left side.

The capability to represent material failure in three-dimensional models of PBX with fracturemechanics- based, so-called “cohesive zone elements” is also unique. This technique is used, for example, for the separation of crystals from the surrounding binder matrix. During the calculation, cohesive elements are automatically inserted where the maximum strength is exceeded; they are used to calculate the decreasing traction during the cracking process. The picture on the right shows at the top a uniaxially compressed RVE, in the middle the corresponding crystal structure without binder and at the bottom the damage value for the cohesive zone elements. 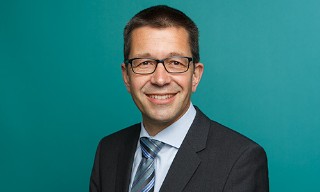