The accuracy of weapons is largely determined by the mechanical interaction between the barrel and the projectile during launch. Barrel vibrations and lateral oscillations of the projectile perpendicular to the barrel axis cause variations in the bullet’s motion state after muzzle exit, resulting in a dispersion of target impact locations. Centrifugal forces also play a role in the case of rifled launch tubes. Aside from the effects on dispersion, the mechanical loads during launch may cause excessive damage to the projectile, which in the worst case poses a hazard to personnel and equipment. Experimental investigations on launch dynamics by means of on-board diagnostics are difficult due to the high level of longitudinal acceleration (sometimes more than 100,000 g). As for small-caliber projectiles, they are not suited simply because of the prevalent space limitations.

Numerical simulations are therefore used at Fraunhofer EMI as a fast and cost-effective alternative. Through the coupled use of structuraldynamic finite-element codes in conjunction with a lumped-parameter interior ballistics model and 6-DOF flight calculations, it is thus possible to gain valuable insights into the influence of individual parameters on the projectile unit accuracy. 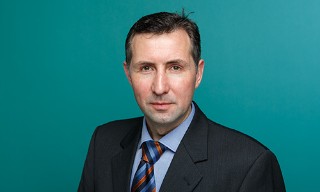