From security research to meteorite impact

High-performance lasers have developed into indispensable tools in the area of industrial material machining, which enable processes such as welding, cutting or drilling to be carried out quickly and precisely. Beyond these established procedures, new possible applications of high-power lasers are being investigated and developed at Fraunhofer EMI. The spectrum ranges from new applications in security research to military applications and examinations of the processes in geological materials during meteorite impact. The capacity of lasers to transport energy in a directed way over large distances plays a major role in these applications.

The potential of the application of lasers for the safe neutralization of explosive devices from a distance has already been demonstrated in numerous research projects, undertaken with various international partners. The benefit of using lasers is that the neutralization can be carried out at a distance, without people being in close proximity of the explosive charges. This process therefore contributes greatly to the safety of bomb squad team members. In addition, software tools for the assessment of safety during laser usage are also being developed at Fraunhofer EMI. The purpose of these tools is to identify possible danger zones and prepare measures for safe laser usage.

The development of new applications of high-power lasers has been furthered by the establishment of a new laser lab in the new building of Fraunhofer EMI in Freiburg.

In particular, the new laboratory allows for the detailed examination of the partly highly complex processes associated with the impact of laser as a function of beam parameters with specific high-speed measurement technology. The observations can then be used for the development of computer models for the predictive simulation of laser processes. Besides a high-power laser lab and a pulse-laser lab including a control room, there is also an application lab available for the preparation of samples and the development and testing of new measurement instruments.

As an example of the processes that occur during the beam-parameters-dependent laser impact, Figures 1a and 1b depict two high-speed images of metal samples during laser exposure with different process parameters. The above picture shows the process for a laser output of five kilowatts with a beam diameter of 28 millimeters. In a high-speed video, it is possible to observe a quick abrasion of a thin layer of the surface, followed by melting of the material in the area of the laser beam. In contrast, the energy input in the below picture with a laser output of ten kilowatts and a beam diameter of 2.6 millimeters is locally by far higher concentrated and results in a fast increase in temperature beyond the boiling point of the metal. This rapid increase results in the formation of an expanding vapor or plasma cloud, which is further heated by the laser beam and thereby becomes partially ionized.

Generally, the energy transfer from the laser beam onto the sample is a question of fundamental importance for laser applications. The transferred energy is physically referred to as effective absorptivity. Exemplary laboratory examinations at Fraunhofer EMI have shown that the effective absorptivity can be in the order of 60 percent for laser intensities as shown in the static experiment in Figure 1a. The test series in Figure 2, however, shows that under certain circumstances significantly lower values can be measured at very high intensities. The cause for this decrease in absorptivity is due to the interplay between the laser beam and the expanding vapor or plasma cloud, in which a part of the incoming laser energy is absorbed. This leads to a decrease in the power of the laser beam on the surface of the specimen and in the heating rate. In the newly equipped lab, the dynamics of these processes as well as the intensity-dependent material parameters can be scientifically examined using the latest measuring technology. The obtained results can then be applied in the optimization of laser processes.

Moreover, the material properties obtained in these investigations are also used in computer simulations which are developed at EMI for the calculation of thermal effects in objects exposed to laser impact. This allows, for example, to calculate the heating of a specimen during laser machining, dependent on laser parameters, while also considering energy coupling, heat transfer processes and phase transitions (melting and evaporation of materials, see Figures 1a and 1b for specific materials and various sample geometries. Figure 3 depicts a simple example of the temporal temperature evolution during laser impact on the backside of a metal plate. The influence of the phase transition on the temperature increase during melting of the sample is visible. By means of a cylindrical sample body, Figure 4 illustrates that the temperature distribution can also be modeled for more complex geometries with curved surfaces. 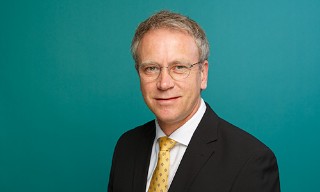